We are huge fans of the Aalto vase from Iittala – We never seem to have enough in the house. We collect them in various sizes and colors. We like to grouped them together for a perfect centerpiece, or as a single, statement piece, well in sight.

Can you believe that every Aalto vase has been handmade at the Iittala factory since 1936, or that it takes 7 glassblowers to make one vase? Simply amazing. Iittala just released an interesting documentary about this true design icon. Watch it here.

Here is more about the Aalto vase:

The origin of an icon
The Aalto vase is an icon of Finnish design. When it was introduced, it was an unconventional object, and a perfect example of Alvar Aalto’s (1898–1976) free-flowing imagination. Aalto sent the first designs of the vase to a competition for works to exhibit at the Paris World Fair 1937. His anonymous entry titled Eskimoerindens skinnbuxa (The Eskimo Woman’s Leather Breeches) won the first prize. It was a set of rough sketches of vases and dishes drawn with pencil, white ink and crayon on colored paper. At the Paris World Fair a ten object collection was presented, and it was an instant sensation. Inquiries started pouring in about Aalto’s poetic new vase design. A classic was born.

Alvar Aalto can well be called the Finnish national architect and designer. His signature vase is found in many homes and is the closest link most Finns have to the designer. Aalto first made his name as an architect, but his furniture and glassware designs are also staples of Scandinavian design. His furniture was often an extension of his architecture. Glassware, on the other hand, was an area where his spontaneity flourished. Whatever Aalto worked on, he was driven by his singular vision. A deep humanism runs through all the master’s work. It works well with his openness to nature’s influences and an unprejudiced attitude to the uses of technology. Aalto believed technology could be humanized. This combination was the base for unique designs on a broad scale from the Villa Mairea house to the Aalto vase.

Mouth blown since 1936
It takes seven glassblowers to make an Aalto vase. Each of them has years of intense training in the many areas of glass craftsmanship. They preform the glass and then put it into a preheated mould. It is blown against the mould walls creating the shape of the vase. When this is done temperatures reach up to 1,100°C. Making an Aalto vase requires twelve work stages, sixteen hours and a great deal of craftsmanship and passion. Each vase is truly unique. A master blower can recognise his own handiwork as well as the kind of fingerprint of his most experienced colleagues.

Handmade in Iittala factory
The Aalto vase has been made at the Iittala glass factory in Finland since it was first designed. The factory was built in the Iittala village in 1881 at a perfect location beside essentials such as wood, water and sand. For 75 years all Aalto vases have traveled from the same factory in the heart of Finland to wherever they are now, in homes around the world. The vase is made with skill, expertise and dedication that has been gathered and shared at the factory through its 130 years of operation. 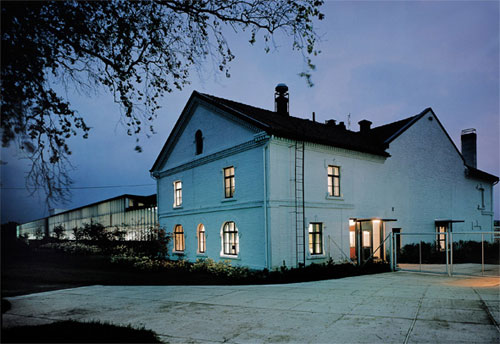 A recognized Classic
The Aalto vase is the best-known Finnish design object. It is also one of the most famous and revered glassware in the world. Aalto’s classic has earned a place in permanent collections of museums around the world including New York’s MoMa. The vase’s form is experimental and daring yet it has universal appeal. Aalto never explained where exactly he got the inspiration for the flowing shape, but there are many theories. It gives everyone the chance to make their own interpretation. Wherever the spark came from, one thing is certain: Aalto interpreted his inspiration in a way that elevated the design into a true masterpiece