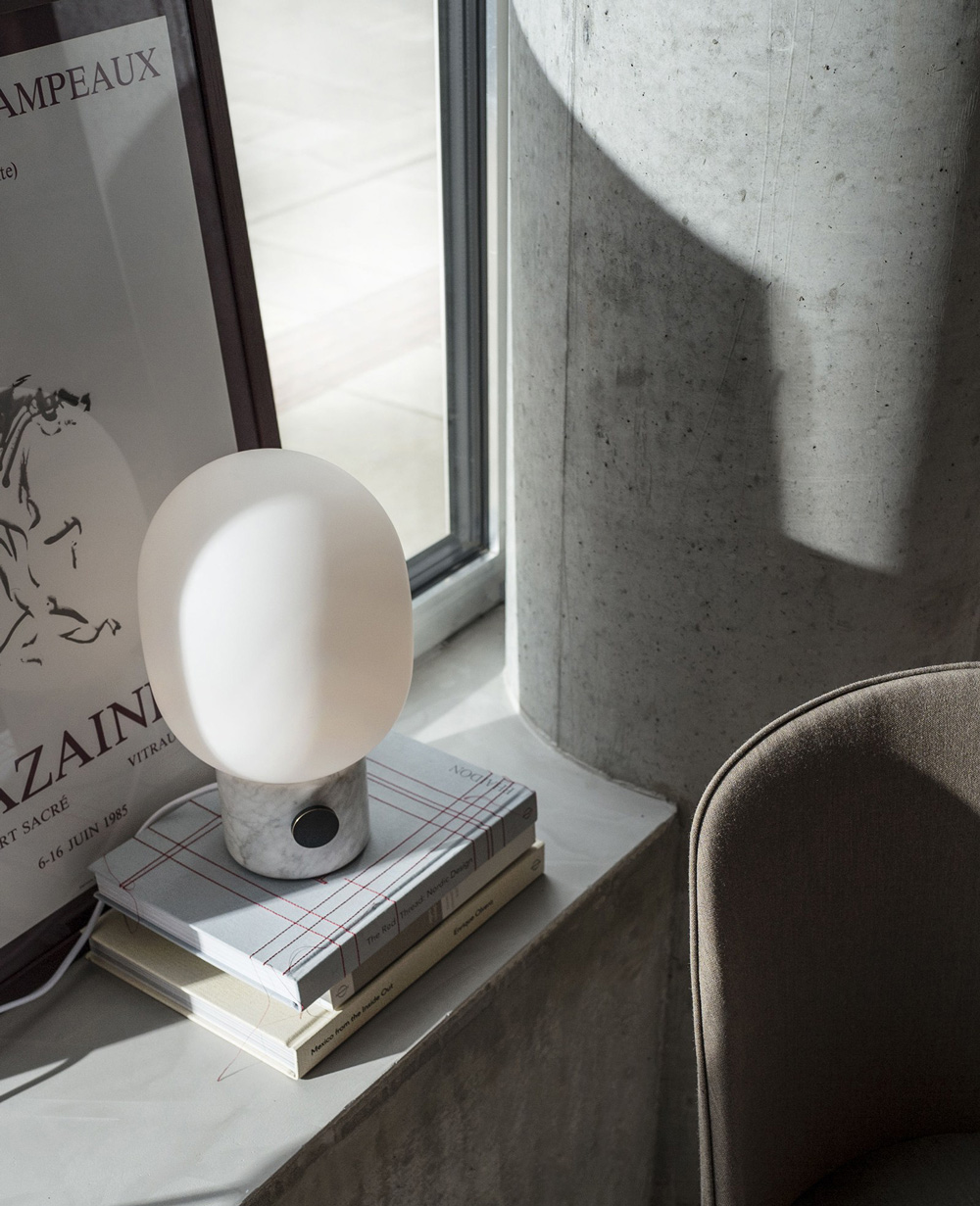 As mentioned last Thursday, I was taking some time off recently and when I came back to the office, my inbox and news feed were loaded… The year 2018 has barely begun, and the design world has already seen a huge amount of new collections, exclusive collabs, inspiring events, and more. I decided to make this week all about the best from the industry, and I’m kicking it off with a selection of snippets from the most noteworthy news of the moment.

The classic JWDA Table Lamp, designed by Jonas Wagell, is being overhauled this season, as Menu is launching the lamp in two new versions – a white marble and bronzed brass variety, which is 12% larger than the original, as both the shade and marblecrafted stand is extended in size, and a black powder-coated steel version. Originally inspired by more archaic oil lamps of the past, the JWDA’s form has been simplified into an organic shape that beautifully blends contrasting elements, whereby the raw and elicate harmoniously meet in one. 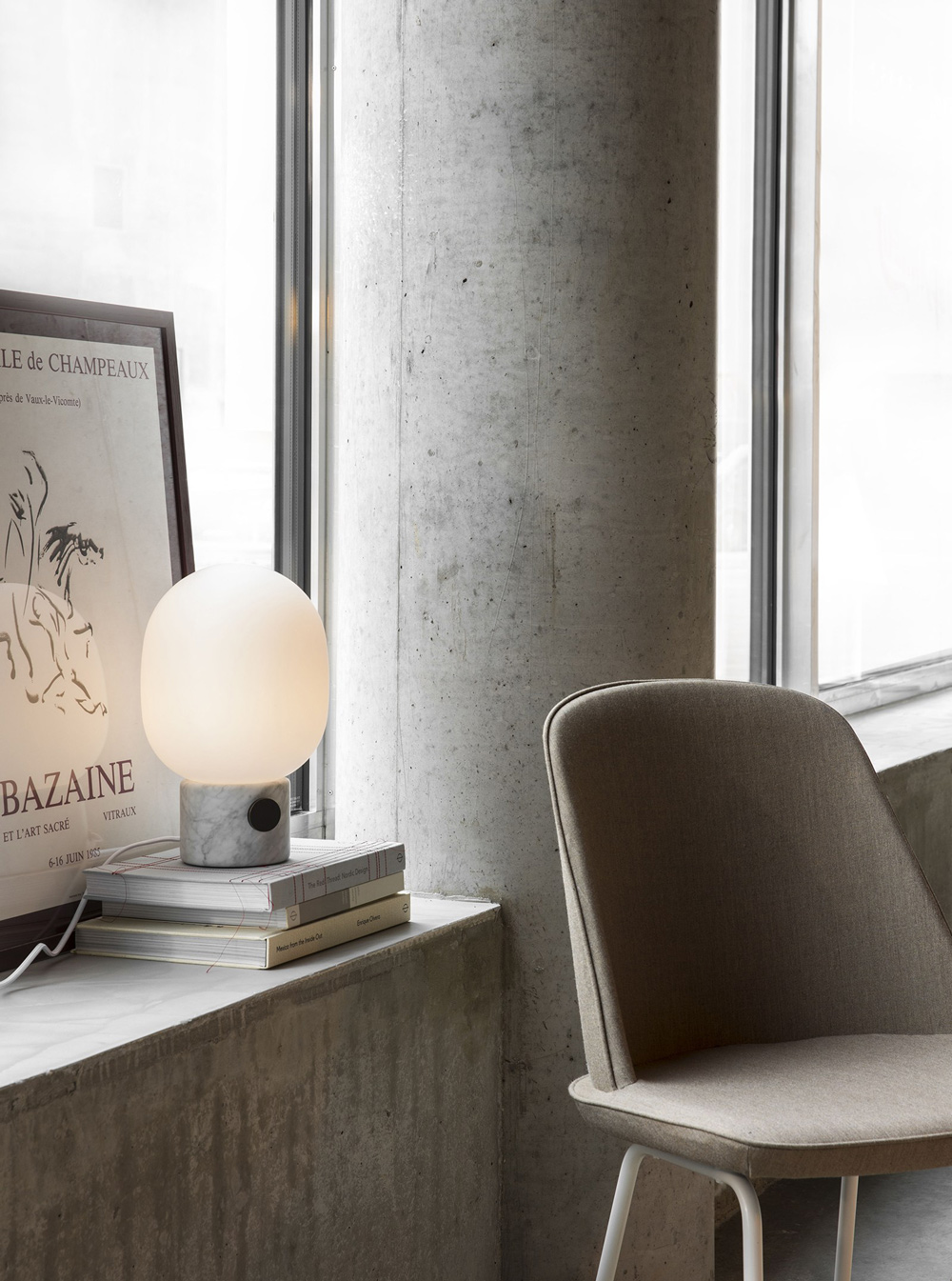 Danish architect and designer Arne Jacobsen is synonymous with modern Danish design. One of the finest examples of his oeuvre is the exclusive Society Table, which Jacobsen was commissioned to design in 1952 as a gift for the American-Scandinavian Foundation’s new office in New York. Carl Hansen & Søn is now introducing Jacobsen’s visionary design, making it accessible to design enthusiasts worldwide.

The desk is made of solid wood, veneer, and steel. The tabletop is covered with fine-structured leather, the drawer unit combines wood and veneer, and the table shelf – with two compartments that fit up to A4 and M65 envelopes – is made of wood with glass sides. The table features an integrated, brushed, stainless-steel desk lamp. Jacobsen designed all of the elements, including the conical lamp that completes the modernistic look.

The Society Table will be in stores from May 2018. 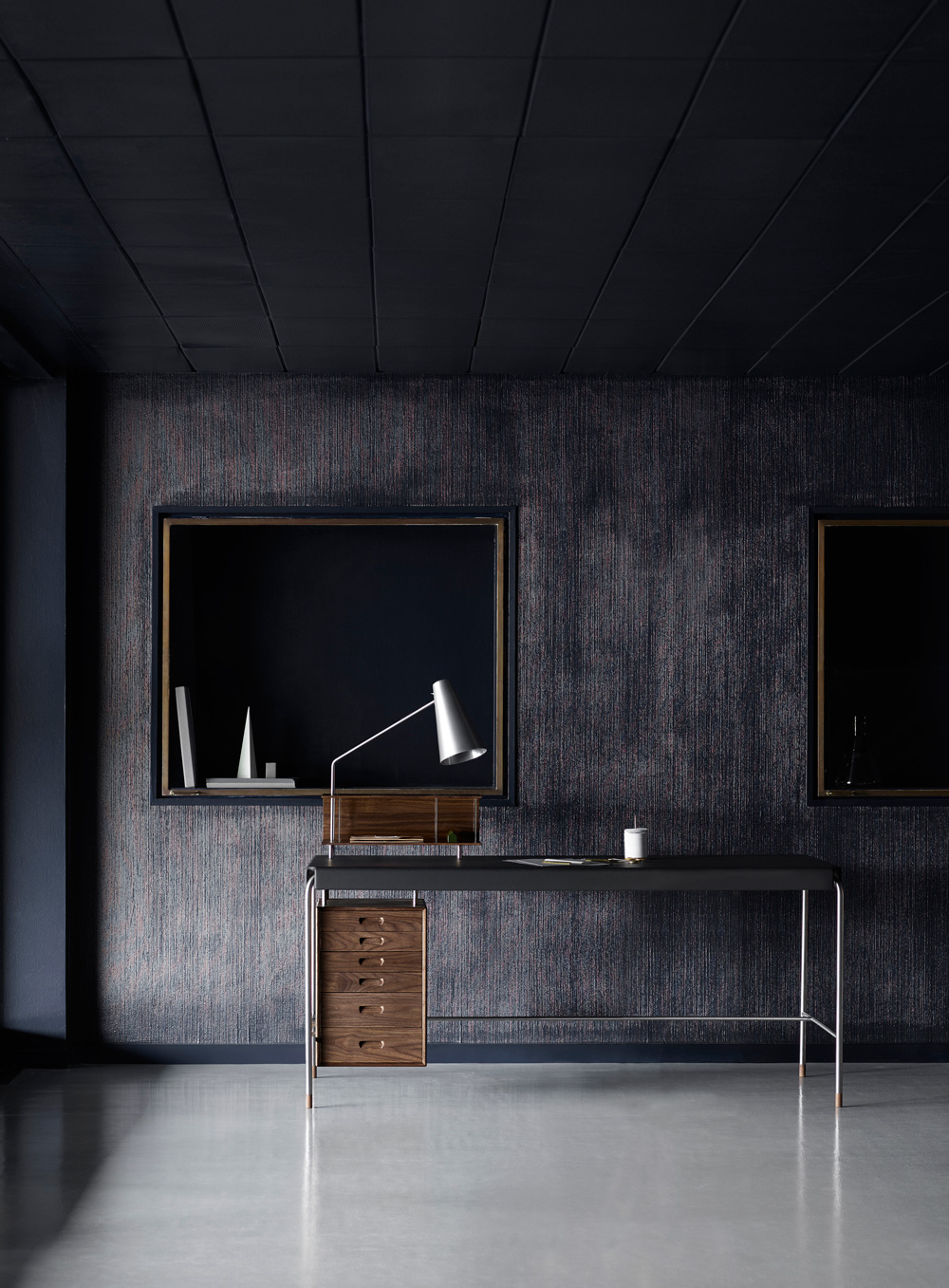 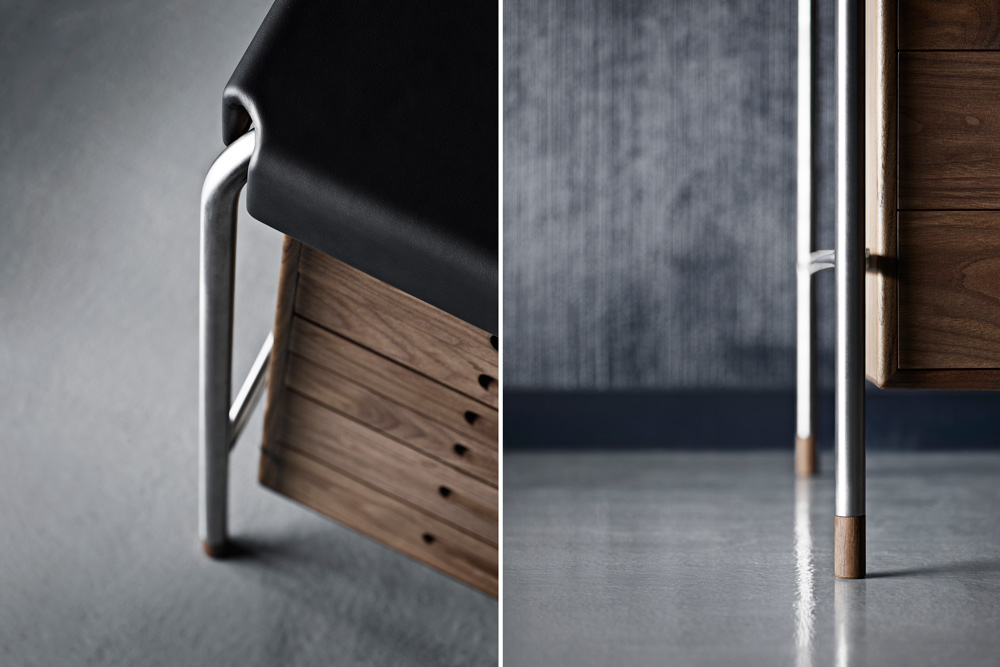 During the Stockholm Design Week 2018, Massproductions will launch the Rose Chair, designed by Chris Martin. New technologies in industrial production enabled the development of this elegant lounge chair that proved challenging both in form and material. A new method for the furniture industry was put to the test during the production of the Rose Chair. With the help of large-scale 3D printing, various life size prototypes were created. This process was both expensive and time consuming, but at the same time it created valuable insights early on in the design process.

The Rose Chair will be launched in four wood finishes: Black Stained Oak, Walnut Stained Beech, Maple, and a fourth color that is yet to be determined by Rose, the designer’s daughter and the eponym of the chair. 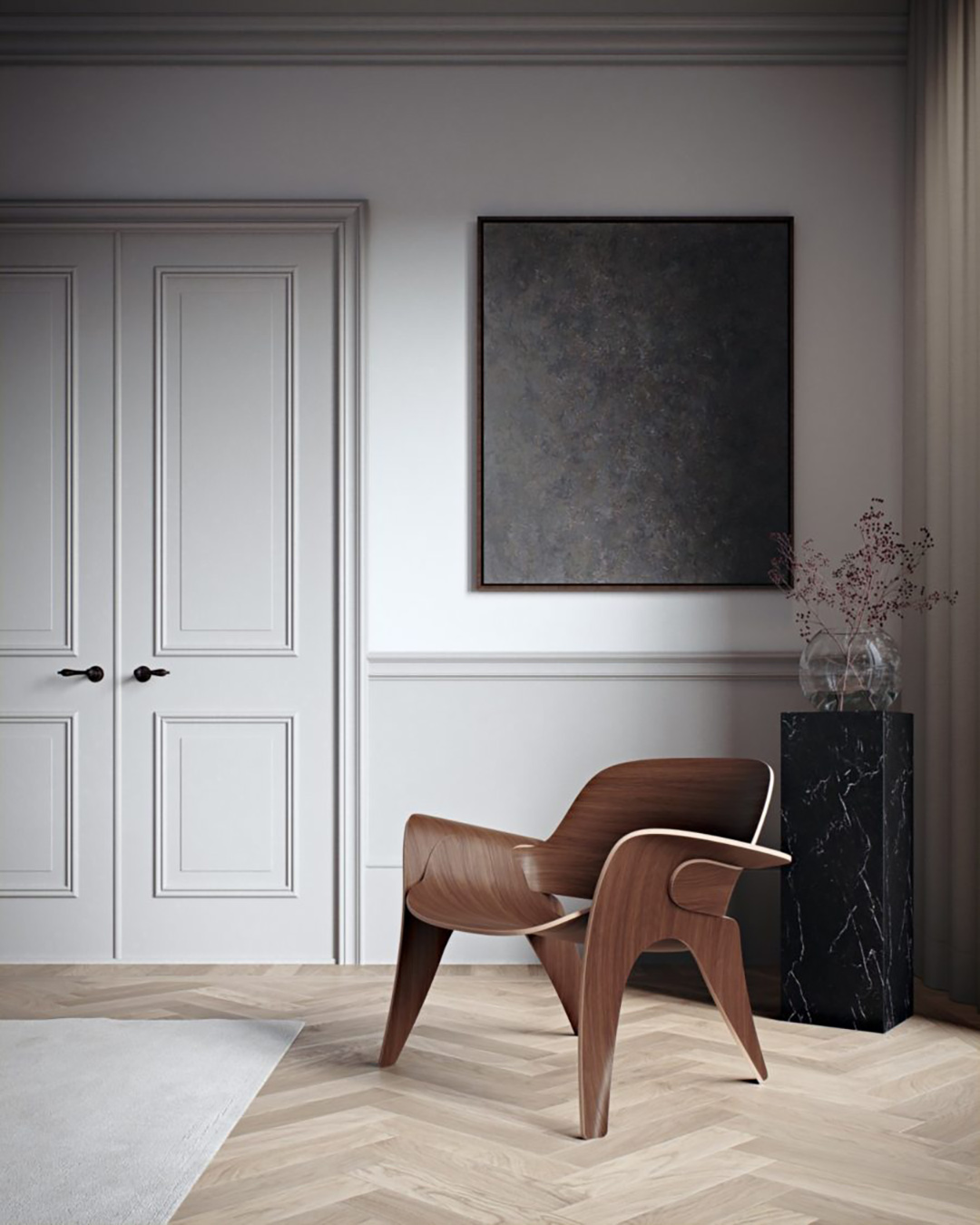 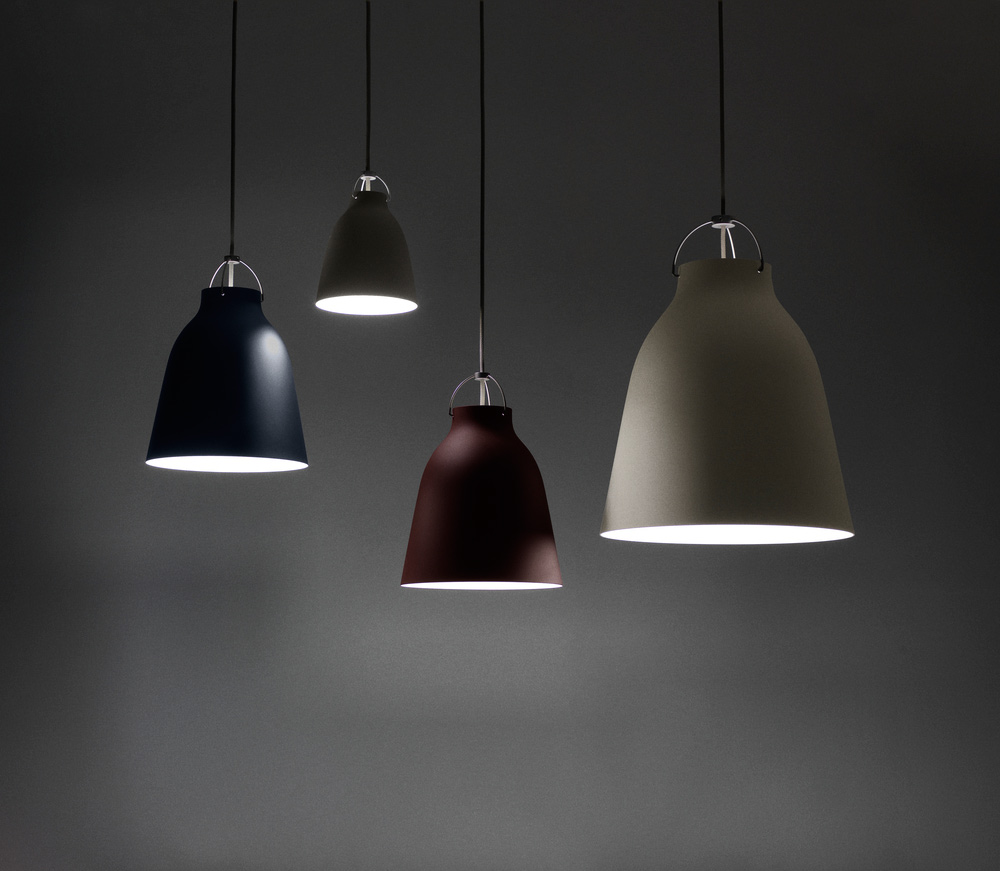 The idea for Mimic Mirror was sparked by the ordinary plastic mirrors that Normal Studio’s Jean-François Dingjian and Eloi Chafaï often saw in barber shops around Paris. The mirrors usually had a plastic pattern sculpted on their back, prompting the duo to translate this visual element into their own design language.

Mimic Mirror is designed with a base pillar, sculpted in cement, on which the mirror is positioned, encased in coated plastic. By juxtaposing materials, the design tinkers with contrasts by combining the heavy feel of cement with the soft touch of plastic, giving Mimic Mirror an at once sculptural yet friendly expression.With reference to its name, Mimic Mirror applies repetitive elements throughout the design: the facets around the pillar base, the triangular pattern of the back and the mirrored glass re ecting what’s in front of it. Thanks to its graphical expression and friendly design, where one can tip the mirror up and down according to preference, Mimic Mirror brings a characterful and modern touch to any room, even when not in use. 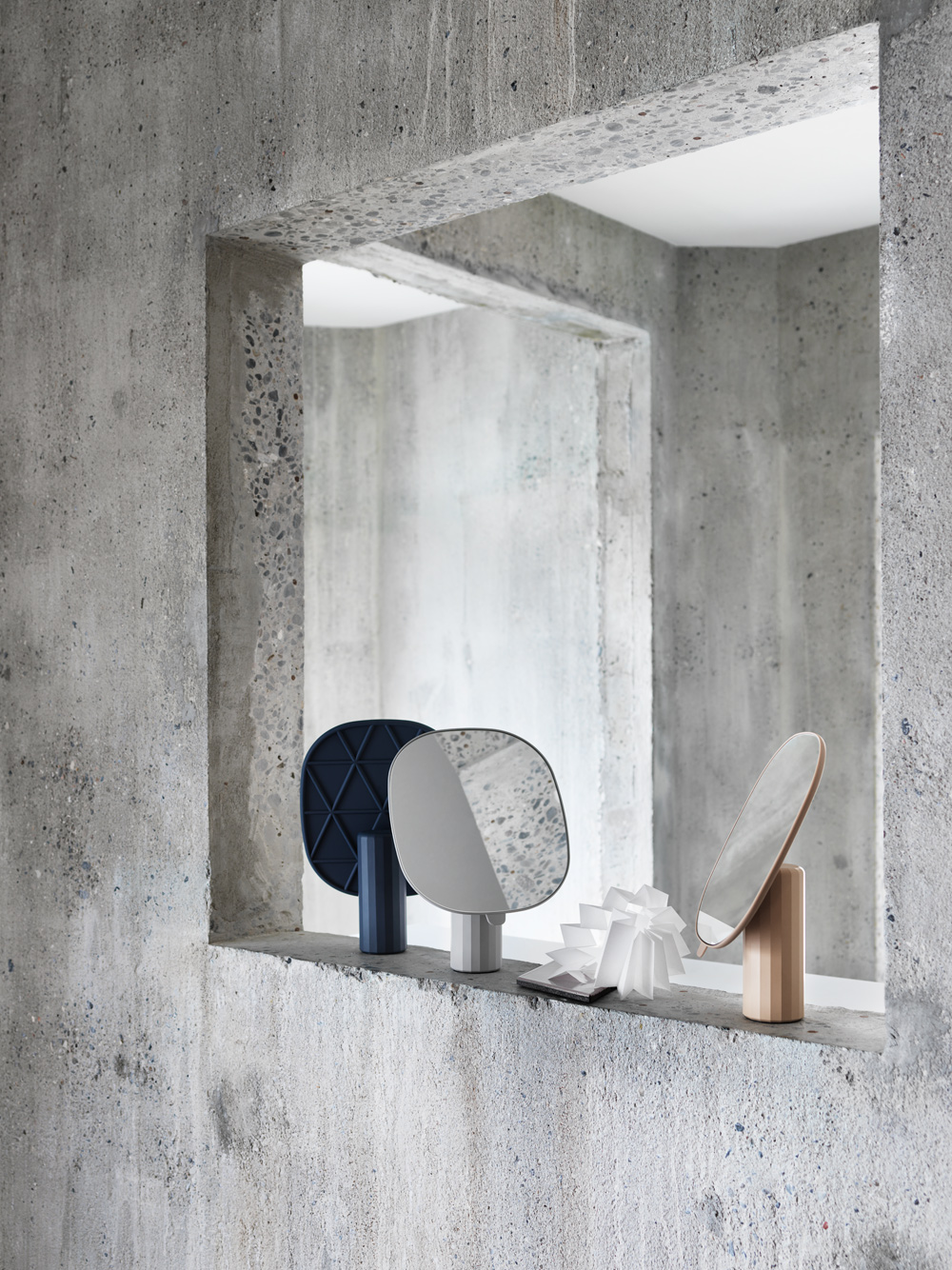 Designed by Norm Architects during the Ariake workshop, the Outline chair is the result of an on-site inspiration and work-process that holds references to Japanese as well as Scandinavian furniture. The chairs’ delicate proportions and friendly shape makes it “Kawaii” (Cute) and very functional in both hospitality and private use. The chair sports a modern appeal with clean and sharp lines, and was built in collaboration with the craftsmen, combining elements from different pieces in the factory. The seat and back are made from plywood whereas the legs are made from solid wood and the chair comes in a version with a fine leather seat combined with a upholstered back in Japanese textile. 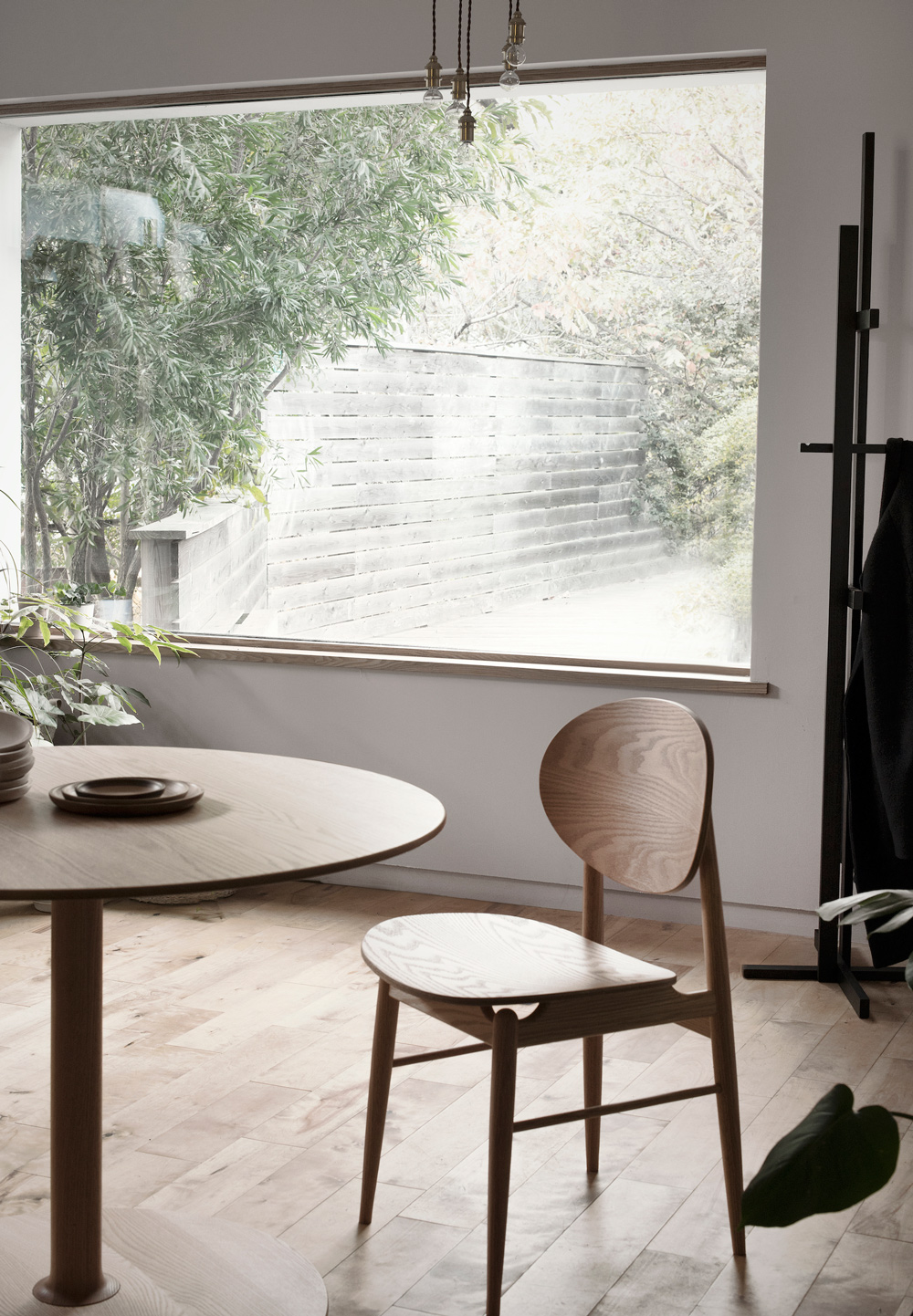 To celebrate the PH 5’s 60th anniversary Louis Poulsen is launching the iconic pendant in new colours. Designed in 1958 by Poul Henningsen, the goal was to ake light softer and more flattering in an era when electric lighting was still new and marked by unwanted glare. Six decades after the lighting pioneer created his celebrated PH 5 pendant, the design remains Louis Poulsen’s bestseller. The range now includes Classic White, Modern White, and six bold colour combinations – Hues of Orange, Hues of Rose, Hues of Red, Hues of Green, Hues of Blue and Hues of Grey. They will be available from February 2018. 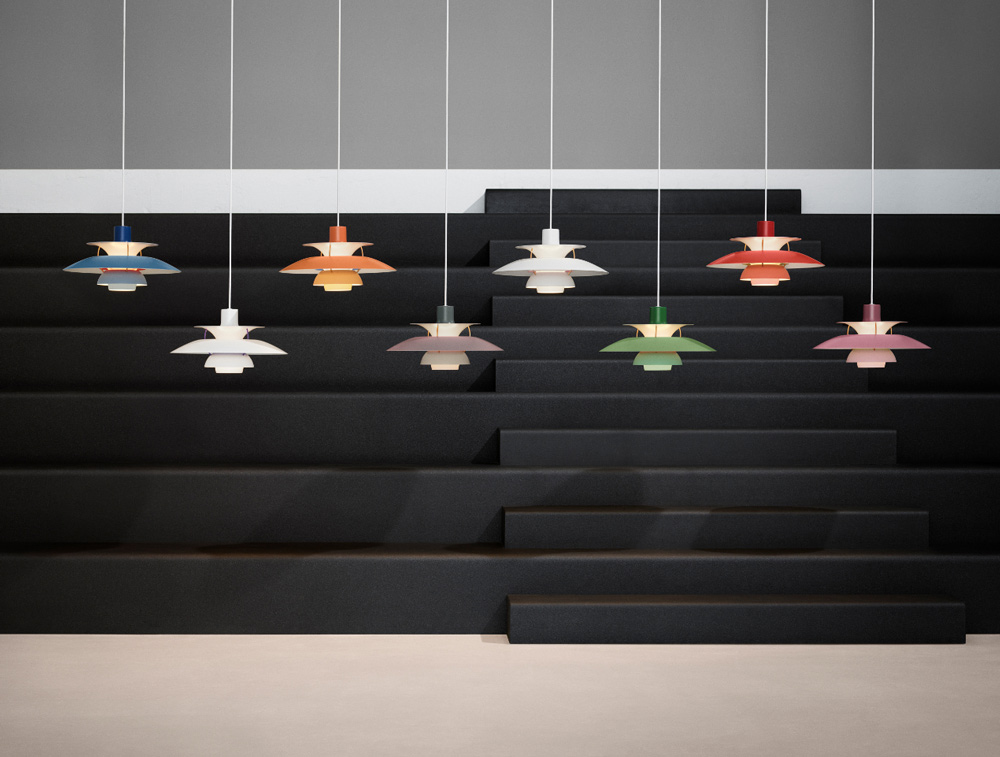 Vita Copenhagen is Moving Into Furniture

Vita Copenhagen has been making lovely lamps such as this feathered pendant we’ve been seeing a lot in the last few years. According to a recent press release, the Danish company is now adding furniture and accessories to their range of lighting design: The Furniture Feelings Collection.

The first pieces to be introduced are an armchair, sofa, coffee table, side table with built-in USB charging hub, cabinet, mirror, and many more, all with a minimal Scandinavian design with the modern twist. For more info, check out Vita’s Facebook page. 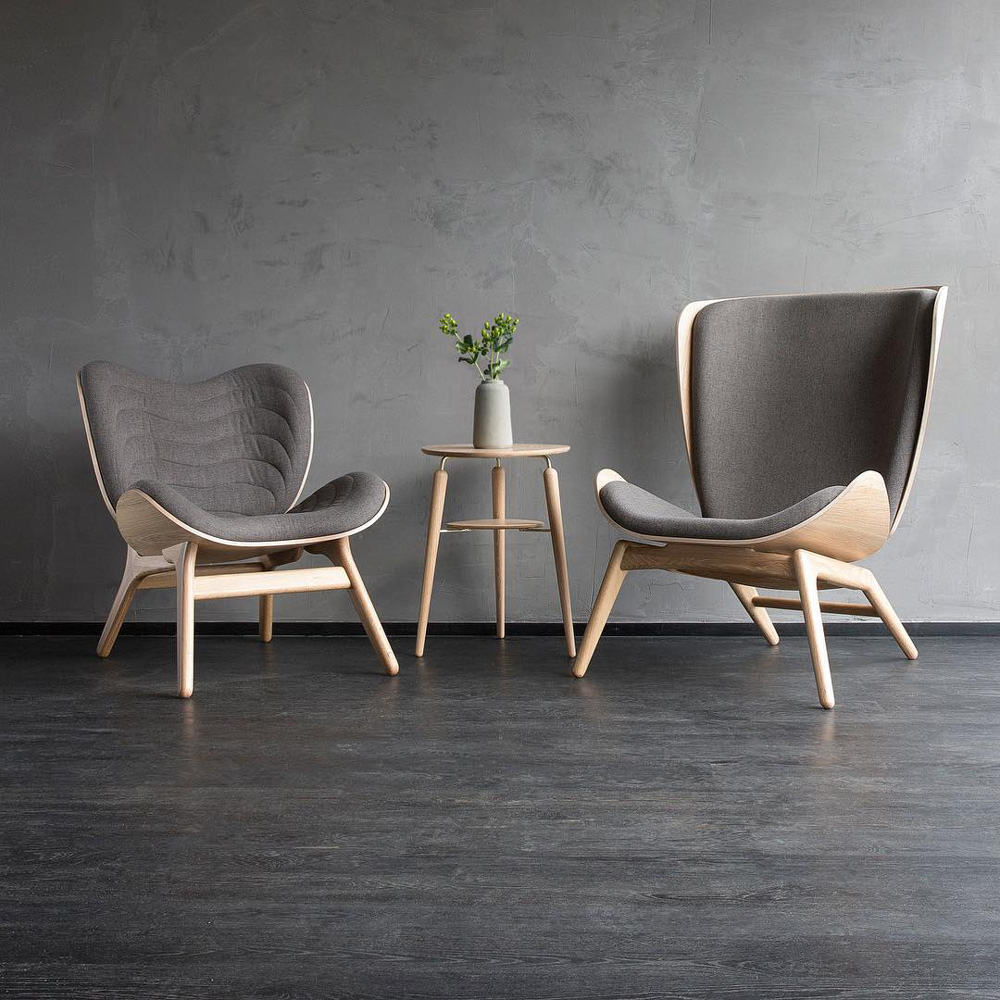 And lastly, not a product news but well-worth a mention:

Despite being listed as one of the richest men in the world, Kamprad was notoriously frugal, turning up to meetings with documents in plastic bags according to people who met him, and buying clothes from second-hand stores. He started IKEA in 1943 when he was 18 years old. Over his lifetime built it into the world’s largest and most influential furniture retailer, with sales of around €36 billion in 2016 through stores in 49 countries. IKEA brought contemporary design to the masses and revolutionised product design, manufacturing and distribution. Source 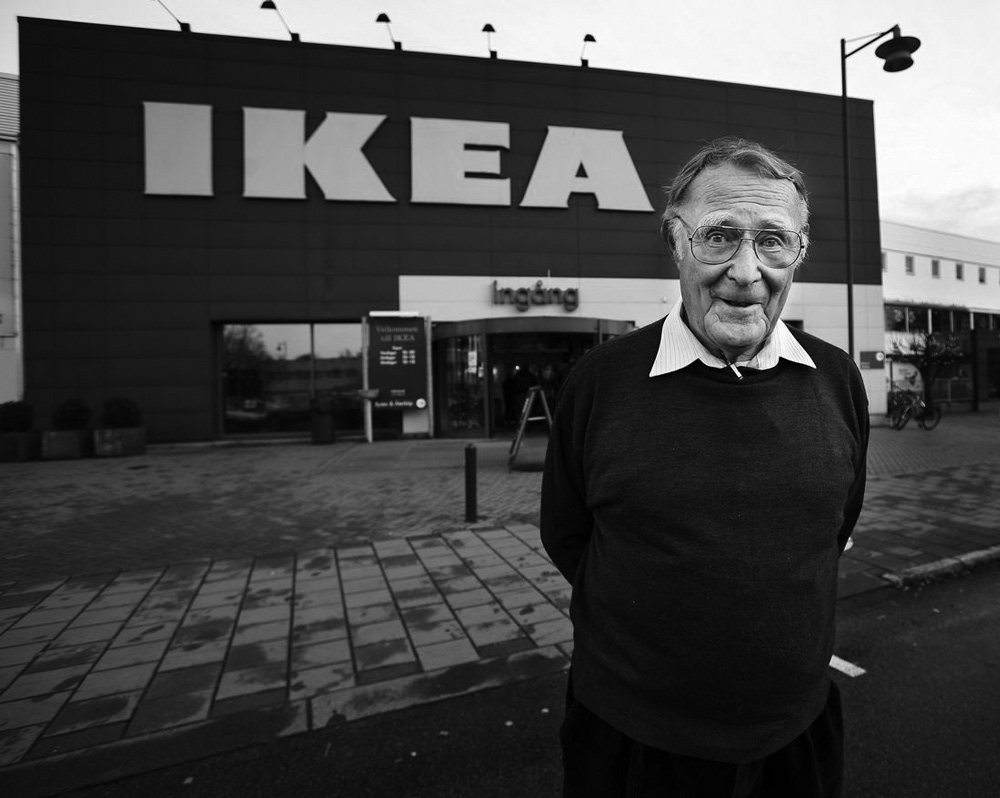